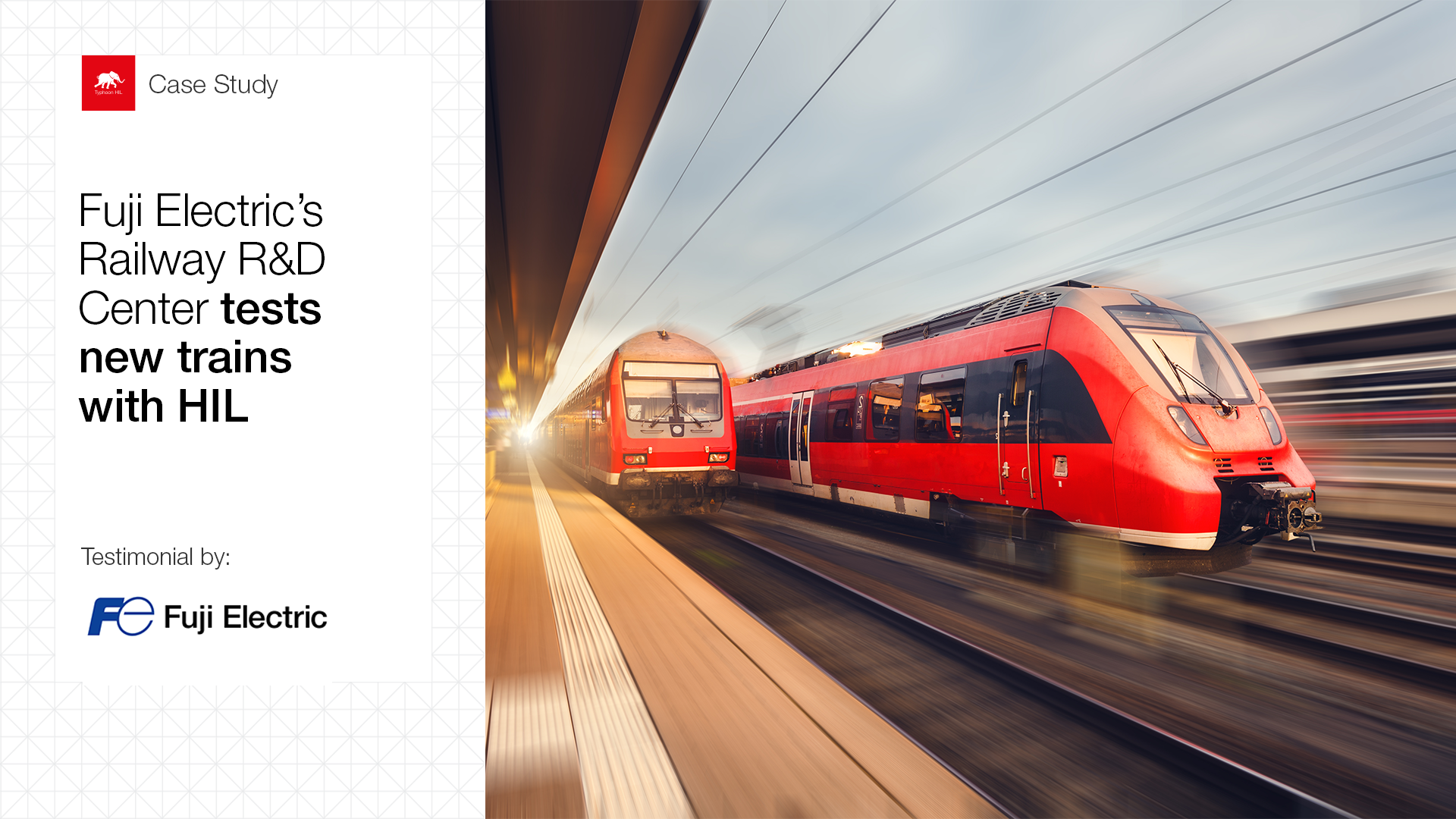 We got a chance to talk with Mr. Tajima of Fuji Electric Co., Ltd., who introduced Typhoon HIL, Inc. to Fuji Electric’s Railway Equipment R&D Department for the design and testing of electric train propulsion inverters and motor drives. We asked him a few questions to learn more about why and how they use HIL for testing. We hope you will enjoy reading more about it below.

Figure 1. Mr. Ahmed and Mr. Tajima, our hosts at Fuji Electric for this interview.

Could you tell us a little bit about your department?

How did you first learn about the Typhoon HIL solution?

During a conference exhibition, I ran into a Typhoon HIL booth where I saw a very neat motor drive Controller Hardware-In-the-Loop (C-HIL) demo with multiple motor drives emulated. Since for train applications there is a need to emulate multiple motors and inverters, I was hugely impressed to learn that Typhoon HIL604 devices can simulate up to four motors and inverters in a single HIL unit.

How did you initially evaluate and adopt HIL?

We initially decided to evaluate the HIL604 real-time device for a few months before making a purchasing decision; that helped us reduce the risk. The evaluation period more than convinced us that HIL604 was super easy to use, quick to deploy, and exceeded all our technical requirements; so we decided to officially adopt it.

The first step in deploying the HIL solution was to build an interface between the controller under test and the HIL’s digital and analog input/outputs (IO). I used an off-the-shelf breakout board and built custom cables. The use of the breakout board sped up the process significantly.

What were your key challenges before introducing HIL testing?

Testing motor drive controls while sitting next to a high-power, humming dynobench is not a pleasant experience. In addition, there is only one dynobench in the whole Fuji Electric’s Suzuka factory that can accommodate 200kW electric motors.

Also, many other teams that work on electric train development are using this high-power test cell, hence, making it exceedingly difficult to find availability when it is needed. Even when the equipment is available, it takes up to one month to configure the high-power testbed which introduces huge delays in the development and verification processes.

Besides the challenges mentioned, there are also many operating conditions in which the controller needs to be validated (e.g. different train operating conditions, different feeder voltage/impedance cases). However, in a high-power lab, only a small subset of these conditions can be recreated, which severely limits test coverage.

Could you give us more details on your HIL testbed?

VVVF inverters, electric motors, the feeder system, and the vehicle body dynamics are modeled in the HIL604. A real inverter controller is directly interfaced with the Typhoon HIL604 device via custom interface boards. 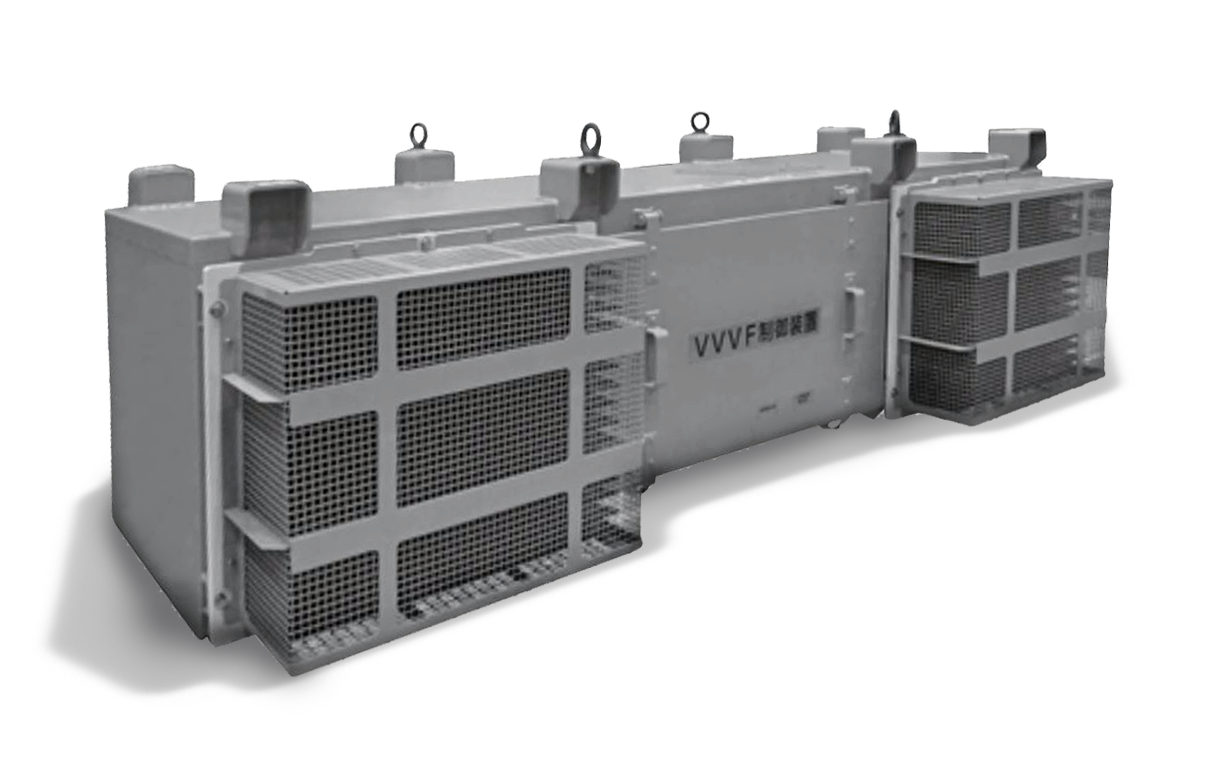 Figure 4. A model example that is being tested using HIL.

What are the main advantages of using HIL testing for your team?

Once the HIL Testbed is built, it can be used continuously 24/7 and it can be accessed remotely. By using HIL instead of a high-power test cell, we test more cases and test more often, practically continuously, and we can start testing very early in the design process.

” By using HIL, we test more cases and test more often, and we can start testing very early in the design process.

We have saved a lot of time and money by extensively using our HIL testbed in all phases of control testing and validation; we only use full-power testing at the very end.

Furthermore, we uncovered a large gap in our test coverage with the current train car tests because the train could not be tested in many high-power operating conditions. By simulating these operating points in the HIL testbed, we were able to improve test coverage significantly. Roughly speaking, the 5-day full power testing has been reduced to less than 2 days. This helped us reduce development and testing times by more than 60% in some cases.

” By simulating in the HIL testbed the operating points that cannot be tested in high-power operating conditions, we were able to improve test coverage significantly and reduce testing time over up to 60%.

Before we started using HIL it was quite stressful to start testing with full power hardware. Since we are testing at a high voltage of 1500V, we had to be careful not to damage the real converter power stage. Now we only go to full power tests once we have exhaustively tested and verified operation with HIL. This makes performing high-power tests less stressful. Currently, we perform 80% of all testing on the HIL testbed, and 20% using the high power setup.

” We only go to full power tests once we have exhaustively tested and verified operation with HIL. This makes performing high-power tests less stressful. 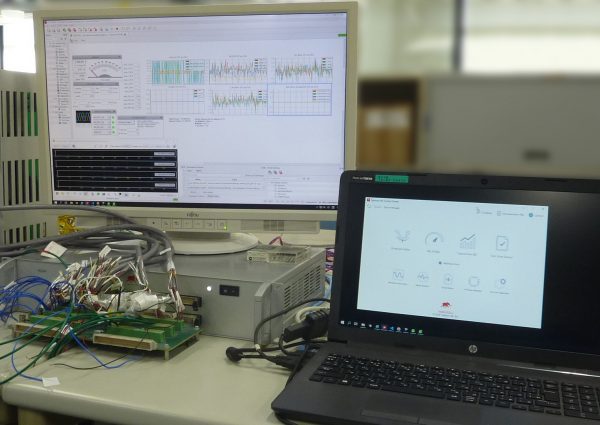 How do you plan to expand the use of Typhoon HIL in your organizations?

We are already expanding the use of HIL for other product lines. We have introduced Typhoon HIL for testing industrial inverters. We want to introduce HIL for testing auxiliary power supplies. We are also working on automating testing with HIL and working towards full test automation.

Are you exploring adopting HIL testing in your work?
Get connected to schedule a free demo with our team.

Did you enjoy this story from Fuji Electric?
Check out their story on HIL testing UPS control.

Want to learn about the benefits of HIL testing drives?
Read our story with Danfoss Drives.