While automotive and aerospace industries have already adopted model based HIL testing, power electronics industry is only playing a catch up. The good news is that the 4th generation HIL is delivering the unprecedented model fidelity needed for the most advanced motor drives and automotive power electronics applications.

Probably the two most demanding power electronics applications for HIL testing are in the Electric Vehicle (EV) domain, namely: high performance motor drive, and battery chargers. Such applications pose a significant challenge for real time simulation fidelity. This is especially true for high switching frequency DC-DC converter applications (e.g. Dual Active Bridge (DAB)) where power transfer is carried out at high frequencies. For some practical applications of this type, even when the time resolution enhancement methods are employed, 500ns simulation step is simply not good enough leading to prohibitively high simulation errors.

Our answer to the challenge is the 4th Gen HIL Device-HIL404, our fastest HIL machine yet. With its ability to reach simulation time steps down to 200ns combined with input sampling resolution of 3.5ns it pushes the high-fidelity real-time simulation into a whole new dimension.

To illustrate some of the benefits of HIL404, we did a comparative analysis of the relative power errors between the HIL402 and the HIL404 for a Dual Active Bridge (DAB) application. The model is controlled by an external open-loop controller switching at 100 kHz and with the dead time of 50ns. Power transfer is measured and compared against the analytical model for a given phase shift. The error is mainly caused by the limited time resolution of the simulator. Here we can clearly see the benefits of the 2.5 times smaller simulation time step and higher frequency sampling provided by the HIL404. 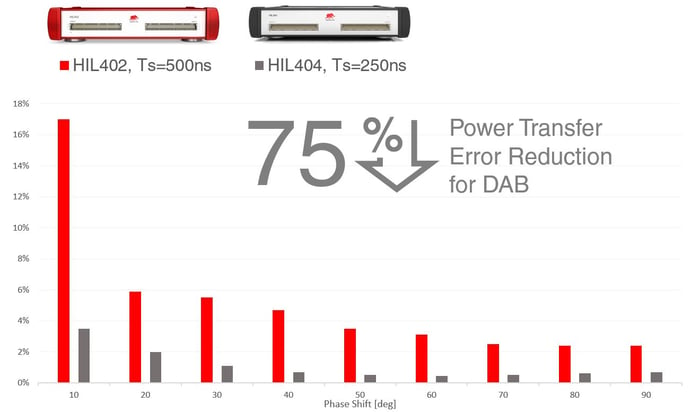 However, HIL404 is so much more than just a faster HIL402 tuned for very-high frequency applications. It is a device that brings many advanced features of our industrial grade 6-series devices to the 4-series, such as:

In addition, HIL404 supports one click import of power semiconductor switching and conduction losses directly from datasheet look-up tables.  It has never been so easy to run high-fidelity and accurate thermal models in real-time.

By leveraging the ultra-high fidelity and ease of use of the existing Typhoon HIL solution, and by bringing the extra speed to the table, the HIL404 makes the HIL testing methodology truly applicable for the emerging high frequency power conversion applications.